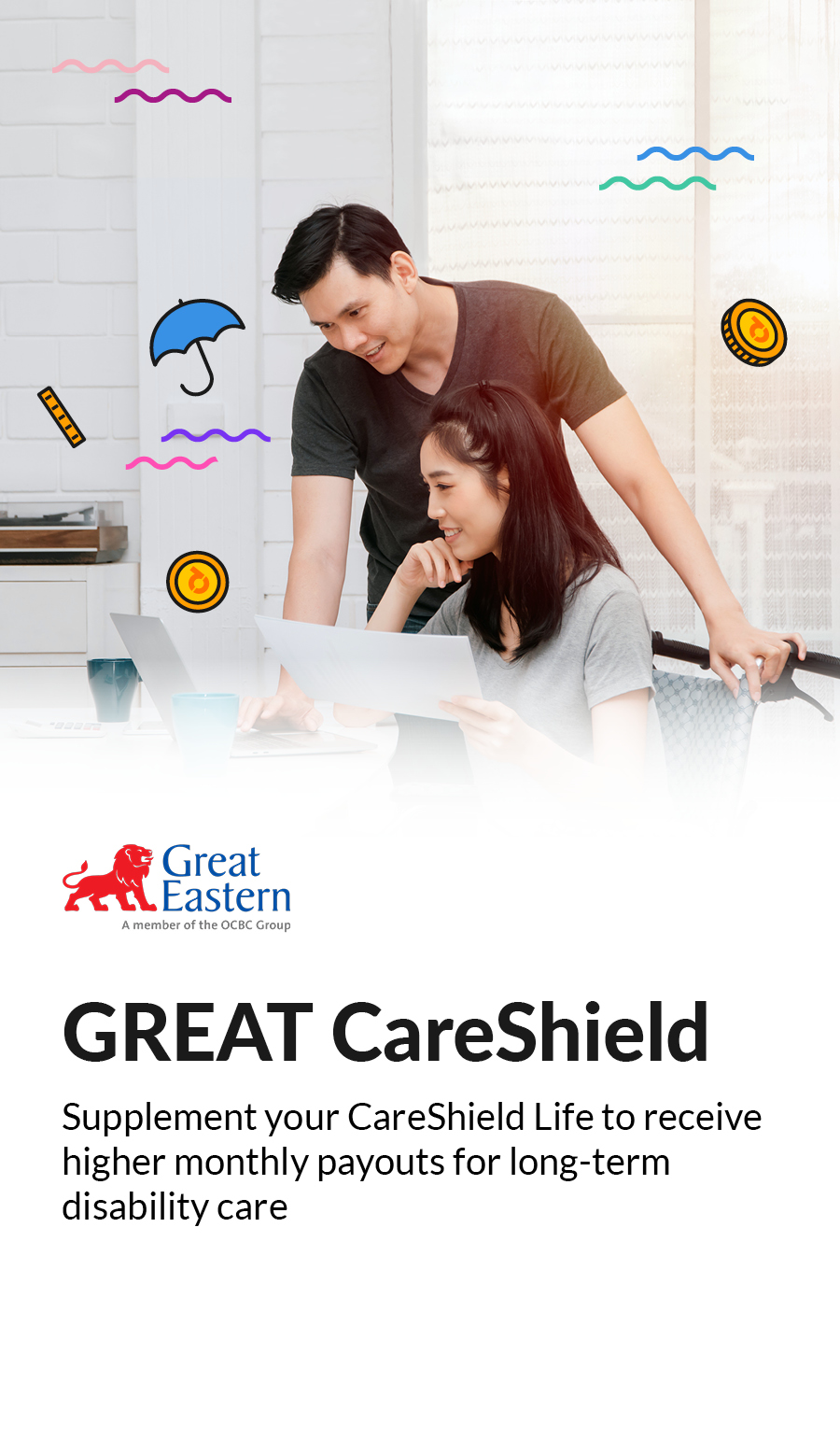 Use MediSave and get extra coverage with GREAT CareShield

GREAT CareShield is the only MediSave-approved plan that gives you up-to-lifetime payouts if you are unable to perform any Activity of Daily Living (ADL).

If you’re 30 years old and above, consider GREAT CareShield to enhance your protection, to have peace of mind for you and your loved ones.

I was considering the need for additional payout beyond the basic $600/month from CareShield Life as I have my family. … More importantly, there's a premium waiver upon having 1 ADL. And sometimes having 1 ADL already makes it hard for one to work. So that feature made sense to me.

What is CareShield Life?

Did you know that all Singaporeans born in 1980 and later are automatically provided with a basic disability cover under the National CareShield Life Scheme (mandatory from 1 October 2020) when you turn 30?

If you are born between 1970 and 1979, insured under ElderShield 400, and not severely disabled, you will be automatically enrolled into CareShield Life from 1 December 2021.

You can get S$6001 per month if you are severely disabled (not able to perform at least 3 out of 6 ADLS).


These are some long-term care services available:


3 in 10 healthy Singaporeans aged 65 could remain in severe disability for 10 years or more. 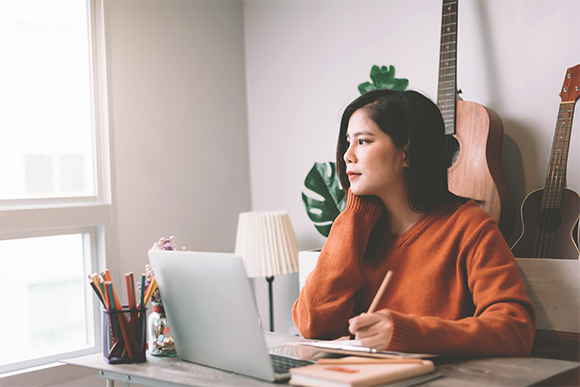 3 in 10 healthy Singaporeans aged 65 could remain in severe disability for 10 years or more.

Walking or
moving around

My main concern about disability is the fact that aside from having to support myself, I have to support my family as well. … My premiums are waived (at 1 ADL) and it even gives a payout of 50% of the monthly benefit I have selected. That's why I chose GREAT CareShield for my CareShield supplemental needs.”

You can only claim the benefits and premium waiver if you are still unable to perform the ADLs after a 90-day deferment period starting from, and inclusive of, the date of your disability assessment. Premium rates are not fixed and may be adjusted by Great Eastern.

Simply provide your details in the form below and we will arrange for a Singtel Dash representative to be in touch with you.

Thank you for your submission!
We have received your form.

CareShield Life is a long-term care insurance scheme introduced in 2020, that provides basic financial support should Singaporeans (≥ 30 YO) become severely disabled. This scheme is administered by the Singapore government.

GREAT CareShield is a MediSave-approved supplementary plan to your CareShield Life or ElderShield scheme aimed to provide additional long-term care coverage in the event of a disability. It provides payouts and benefits starting from as early as the inability to perform just 1 Activity of Daily Living (ADL).

Do I need to be covered under the CareShield Life or ElderShield scheme in order to purchase GREAT CareShield?

Yes. In order to be eligible to purchase GREAT CareShield, you will need to be insured under one of the following schemes:

I don’t know if I have CareShield Life or ElderShield 300/400. How may I check on this?

There are a few ways to check on your coverage.

What is MediShield Life? Integrated Shield Plan? Are they the same or related?

MediShield Life is a basic healthcare insurance plan that protects all Singapore Citizens and Permanent Residents against large medical bills for life. Healthcare Insurance plans are different from long-term care insurance plans (which are focused providing you with a cash payout over a long period of time in the event of disability).

An Integrated Shield Plan (IP) complements your MediShield Life by providing you with an additional private insurance coverage component provided by your private insurer if you have purchased such a plan.

These are all different plans from CareShield Life or GREAT CareShield as they address different coverage needs.

I have checked and confirmed that I don’t have ElderShield or CareShield Life. Can I purchase GREAT CareShield as a standalone plan?

However, you can check if you are eligible and try to enroll for CareShield Life scheme by visiting www.careshieldlife.gov.sg/careshield-life/about-careshield-life.html

If you have successfully enrolled on CareShield Life, you can apply for GREAT CareShield.

*Note: ElderShield is no longer available for new enrolment

I have an existing ElderShield supplement. Can I still purchase GREAT CareShield?

Yes, you can purchase GREAT CareShield to top-up your existing ElderShield supplement coverage.

If you intend to use MediSave funds to pay the premiums of GREAT CareShield, you need to be aware that the Additional Withdrawal Limit of S$600 per insured person per calendar year is shared across all ElderShield and CareShield Life supplementary plans.

No, the MediSave annual withdrawal limit of S$600 per calendar year is shared across all supplementary plans for CareShield Life and ElderShield.

My premium is more than the S$600 MediSave Additional Withdrawal Limit (AWL). How can I pay the balance in excess of the AWL?

If your premium is more than S$600 and you have chosen MediSave as one of your premium payment options, you will be prompted and offered other options to pay the balance:

^Not available on the online sales portal. Please approach your Financial Representative for these payment options. GIRO payment method is for renewal premiums only.
If I do not have sufficient funds in my MediSave, can I use the MediSave of one of my family members?

Yes, you may use the MediSave funds of any of your following family members to pay for your GREAT CareShield premiums#:

#You can only use your own MediSave funds if you purchase GREAT CareShield via the online sales portal. If you wish to use the MediSave funds of your spouse, parents, children, or grandchildren, please approach your Financial Representative. You must be a Singapore Citizen or Permanent Resident.

*APS is for families who need assistance with MediShield Life and/or CareShield Life premiums, even after receiving premium subsidies and making use of MediSave funds to pay these premiums.

What is the Monthly Benefit that I can purchase?

You may select a Monthly Benefit from S$300 to S$5,000# (in multiples of S$100).
This amount is in addition to the benefits under your CareShield Life or ElderShield.

# Please note the maximum Monthly Benefit per Life Assured aggregated across your existing LifeSecure and/or ElderShield Comprehensive plan(s), if any, including your GREAT CareShield, shall not exceed S$5,000.

Will my premiums for GREAT CareShield increase with age after I have signed up?

No, your premiums are level throughout the premium payment term chosen and do not increase as you get older. However, please note that premium rates are not guaranteed and may be adjusted based on future experience of the plan.

How long does GREAT CareShield cover me for?

GREAT CareShield provides coverage for life as long as your premium obligations are being fulfilled.

How long do I have to pay premiums for?

The premiums for GREAT CareShield are payable on an annual basis. Depending on your entry age (at last birthday), the selectable premium terms are as follows:

Can I change my premium payment term (for e.g. from “Pay till 67 years” to “Pay till 95 years”) after my policy has commenced?

No, you will not be able to change your premium payment term after your policy coverage has commenced.

Do I need to go for a medical examination to be covered under GREAT CareShield?

To declare your medical conditions, you can either contact your Financial Representative or leave your contact details here.

Depending on your mode of payment, the commencement date of your policy will vary:

By using MediSave funds as your payment option:

Are there any condition(s) not covered under the plan?

Yes. Great Eastern will not pay any benefits for any Disability resulting from:
(a) The Life Assured’s deliberate acts that endanger his/her life, such as self-injury, suicide or attempted suicide, while sane or insane;
(b) Alcoholism or drug addiction;
(c) War (whether declared or not), invasion, rebellion, revolution, civil war or any warlike operations; and
(d) Pre-existing Conditions.

“Pre-existing Condition” refers to:
(a) Any illness, disease, disability, defect or impairments (“Condition”) from which the Life Assured was suffering prior to the Cut-Off Date#; or
(b) Any Condition of which signs or symptoms had existed in the 12 months immediately preceding the Cut-Off Date#, for which:

unless such Condition was declared to Great Eastern and no exclusion of the same was imposed by Great Eastern, regardless of whether any claim had previously been made in respect of such Condition.
# “Cut-Off Date” refers to (1) the Commencement Date, (2) date of reinstatement of the Policy or, (3) date of change of benefits under this Policy, whichever is applicable.

If I need to make a claim, what should my family member(s) do?

In the event of a claim, please get your family member(s) to visit here to have a guided process.

Depending on the severity of disability, Great Eastern will review medical information available and advise you or family member(s) to arrange for periodic assessment/review, where applicable.
If the disability has worsened from the inability to perform 1 Activity of Daily Living (ADL) to the inability to perform 2 ADLs, you will receive start receiving 100% of the Monthly Benefit (instead of 50% of the Monthly Benefit under 1 ADL), the Caregiver Benefit and Dependant Care Benefit (if relevant conditions are met).

Will my GREAT CareShield lapse due to non-payment of renewal premiums?

Yes. However, once you have reached the age of 61 years (age last birthday) on a policy anniversary, and your GREAT CareShield has been in force for a period of at least 10 years, the policy shall not lapse for non-payment of a renewal premium. Instead, your policy will be converted into a paid-up policy with a reduced Monthly Benefit and without the need for you to pay any more premiums.
Otherwise, the policy shall lapse for non-payment of a renewal premium.

Can I cancel the policy if the plan is not suitable for me?

1Payouts from CareShield Life starts at S$600/month in 2020 and increases annually until age 67 or when a successful claim is made, whichever is earlier. More info at https://www.careshieldlife.gov.sg/home.html

5MoneySmart, Nursing Homes in Singapore – How Much Does It Cost?, July 23, 2019, https://blog.moneysmart.sg/family/nursing-homes-singapore/

7The Initial Benefit is a lump sum payment equivalent to 3 times of the Monthly Benefit. In the event the Life Assured fully recovers from the disability, the Initial Benefit may be paid again for subsequent episodes of inability to perform at least 1 ADL. However, it is not payable if such subsequent disabilities arise from or are related to the cause of disability(ies) for which there was a previous claim for Initial Benefit.

9This is subject to Deferment Period, and for as long as he continues to suffer from the disability.

1060% of Monthly Payout payable upon inability to perform at least 2 ADLs, for up to 12 months. Caregiver Benefit is subject to Deferment Period and payable for up to a maximum of 12 months (whether consecutive or not) per Policy Term

1130% of Monthly Payout payable upon inability to perform at least 2 ADLs, for up to 48 months. Applicable if the Life Assured has a Child who is below 22 years old (age last birthday) as at the Claim Date; subject to Deferment Period and payable for up to a maximum of 48 months (whether consecutive or not) per Policy Term

This advertisement has not been reviewed by the Monetary Authority of Singapore.

The above is for general information only. It is not a contract of insurance. The precise terms and conditions of this insurance plan are specified in the policy contract.

This policy is protected under the Policy Owners’ Protection Scheme which is administered by the Singapore Deposit Insurance Corporation (SDIC). Coverage for your policy is automatic and no further action is required from you. For more information on the types of benefits that are covered under the scheme as well as the limits of coverage, where applicable, please contact us or visit the Life Insurance Association (LIA) or SDIC websites (www.lia.org.sg or www.sdic.org.sg).